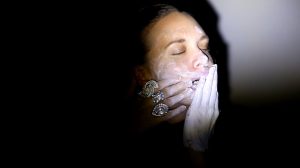 Carima Neusser and Per Hüttner will participate in Satyrianas in Sao Paulo. It is the 30th anniversary of the festival. They contribute with the performance TransDisciplinary Romanticism that has its world premier on November 16:

TranceDisciplinary Romaticism is a performance by and with Swedish choreographer Carima Neusser and visual artist Per Huttner. It takes its inspiration from a painting by Swedish 19th century painter Carl Fredrik Hill and investigates different forms of insanity and how social and political ideas informs our understanding of the phenomena. The two artists find in Romantic art great tools to understand the current social and political climate and especially why right wing populist has such an appeal today. The performance invites the audience to enjoy music, film and dance in unusual and creative configurations in order to reflect on how desire can be re-considered to challenge their conception of the world.