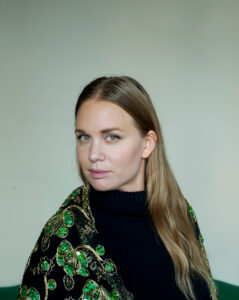 Carima Neusser was born in Stockholm. She is a choreographer, dancer, performer and artist. She works with interdisciplinary projects that take their starting point in dance and choreography. Her practice spreads over an expanded field where she interacts with visual arts, architecture, neuroscience, fashion, music and stage technology. She works and collaborates throughout different international and national contexts and her work has been presented at dance venues, galleries, museums, music festivals among many others. Her work has been presented in Sweden, Finland, Norway, Italy, France, Mexico, Haiti, USA and Brazil. She earned her master degree in Culture and Media production at Linköpings Universitet (2014-2016) and she studied dance at Iwanson International School of Contemporary Dance (2006-2009)

Her work reflects on metaphysical questions. She is interested in the connection between the body and the spiritual and how we can make our everyday lives richer by gaining an understanding of this question. Carima focus on process-based work and use improvisational methods. She like to surprise herself and move away from what she already know and into the unknown. There the meeting with other disciplines becomes important in her work and she is constantly looking for new ways to work more freely and personally.

She is a member and co-founder of the organisation Tomorrow’s Art Audience. They organize seminars, workshops and projects that bring together choreographers, artists and students around Sweden and the Nordic region. 2020 She toured her collaborative piece Transversal Madness, in Mexico City at Dia D, Cuernavaca at F4Libre and at Satyrianas festival in Sao Paulo. In 2019 she presented Ghetto Gucci at The 6th Ghetto Biennial in Port au Prince as part of the project Revolution Hub. 2019 she presented Baroque Architecture and Submission at Dansens Hus, Stockholm. She presented Spiritual Lap Dance in collaboration with artist Per Hüttner and neuroscientist Stephen Whitmarsh at La Folie Numerique in Paris and Winslow Garage in Los Angeles. During an international tour in early 2018 she presented performances and organized interdisciplinary seminars between arts, dance, science and philosophy in Mexico City, Los Angeles and Sao Paulo.

In 2017 she presented Start in the Middle at Gallery Fagerstedt Stockholm and Album Arte, Rome. She performed at the exhibition Elgaland-Vargaland with Jean-Louis Huhta, Carl Michael von Hausswolff and Leif Elggren at the Modern Museum in Stockholm. She presented her duo piece (We Are) Made of Star Stuff at Konsthall C, Svarta Huset, Dansens Hus, Stockholm and Verkstad Konsthall, Norrköping. In 2016, She presented her work, Conversation and Choreography at How Assemblies Matter, by Jenny Marketou, Athens Biennial OMONIA, Athens. In 2015, she danced in Anyway not everyone will read it, by visual artist Jacopo Miliani at Spazio K, Prato, Florence and at the Dance Museum in Stockholm. She peformed in Huddle and Slantboard by Simone Forti at the exhibition Here It Comes, Index, Stockholm. 2015 she choreographed and participated in # 3 GO by Christina Caprioli and Hanna Wildow at CCAP in Stockholm. She has collaborated with Berns Salonger, the club 2.35:1, with RMH and Skyddsrummet with the project Collective Noir in 2011- 2012.

Carima has also choreographed pieces for several fashion shows on commission by the Swedish independent fashion brand, The Local Firm at Stockholm Fashion Week. She has worked with the fashion photographer Hedvig Jenning. She has choreographed and performed with artists such as Jonathan Johansson, Name The Pet, Silvana Imam and Norma.