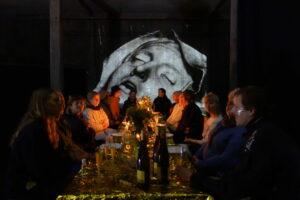 An interdisciplinary group of artists present the performance Sensing Landmarks at Bergen School of Architecture.

Sensing Landmarks brings together dance, visual art, architecture and music with the aim of creating a multi sensorial guided tour that is specific to Bergen School of Architecture´s architecture, history and natural setting. The artists have developed texts, scripts, choreography, music and scenography to guide the audience through an interdisciplinary experience with emphasis on the human senses. The collective performance takes the form of a guided tour and takes its starting point in an investigation into the concept of “Axis Mundi” – also called the cosmic axis, world axis, world pillar, center of the world, or world tree.

Bergen School of Architecture is the site for the guided tour connecting the vertical architecture of the building with the concept of the axis mundi. The tower, the staircases of the building and the sea outside connect to our bodies, our spine and our movements and take us on a journey between heaven and earth.

You will travel by boat to the Bergen School of Architecture from one of the harbours in the Bergen City Center (exact meeting point will be announced shortly.)

The project is funded by: Nordic Culture Fund and Bergen Kommune. 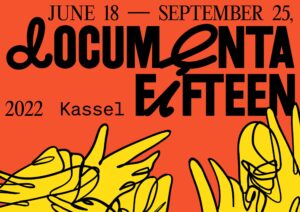 In the summer of 2022 Carima Neusser will participate in documenta fifteen in Kassel, Germany as part of Atis Rezistans / Ghetto Biennale. She is invited to present the piece Ghetto Gucci together with Adriana Guerrier, Michel LaFleur and Jerry Reginald Chery aka Twoket. Composition and live sound: Per Hüttner

In Ghetto Gucci, the artists invite the audience to reflect on the role that visions, dreams and life goals play in our lives. Whether we live in abject poverty or immense wealth, we are relentlessly confronted with advertising images, media reports and slogans that tell us what to think and how to act. How can we find alternatives together? Through art we can engage with each other with our bodies, emotions, share experiences and support each other.
During the performance, we will see two performance artists Michel La Fleur and Jerry Reginald Chery in minimalist tableaux that may reflect on masculinity and emotions. Carima Neusser and Adriana Benjamin dance together, developing a different kind of freedom and alternative ways of communicating outside spoken language.
Between the different tableaux, paintings of heroes from the Haitian revolution are projected onto the stage. The Haitian Revolution was and is an important inspiration for the ongoing historical transformation of the lives of Haitians and anyone else who wants to change their lives. Ghetto Gucci inspires both artists and audiences to learn from each other, from history and to reflect on what kind of future we can imagine individually and collectively.

PERFORMANCE AT ISSUES GALLERY IN STOCKHOLM

At 5.30 February 9, there will be a performance by dancer and choreographer Carima Neusser.

Issues presents JOY, a furniture collection by Fredrik Paulsen. The first JOY chair will be installed in the art gallery like a sculpture during the Stockholm Design Week with the ambition to actually bridge the separated industries of art and design. The installation is created in collaboration with visual artist Vincent De Belleval, and will feature the first JOY chair.

The performance and installation is part of Stockholm Design Week, February 9–13 February, 2022

Welcome to the opening of “In Search of Role Models” an exhibition featuring the work of Aya ElFallah (EG) and Carima Neusser (SE).

Opening February 5, 16.00 to 19.00
Location: AllArtNowLab, Älvkarleövägen 6 (Ropsten t-bana – exit Hjorthagen).
The exhibition forms a part of the international research project “Local Role Models” initiated and organized by Out of the Circle (EG), Vision Forum (SE), and AllArtNow (SE).
Local Role Models is an interdisciplinary project where artists and curators from Egypt, Sweden, and Syria carry out a collective investigation into how we think differently about heroes and stars.
Who are the real heroes in our lives?
Are they the people who appear in the media? Or are they the people we meet in our every day who have a real influence on our values, goals, and existences?
In the exhibition, artists Aya ElFallah and Carima Neusser present new work that has grown out of a workshop in Cairo in January 2022. Both artists look at their parents and how they have shaped their life journeys.
Curated by Elham Khattab, Per Hüttner & Abir Boukhari
The exhibition is open February 5-15. Saturdays from 14.00 to 17.00 or by appointment. Please visit during opening hours or email “allartnow@gmail.com”
Local Role Models is supported by Creative Force at the Swedish Institute Helge Ax:son Johnsons stiftelse and Stockholm Stad. 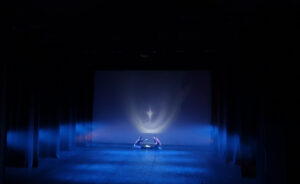 Carima Neusser is creating light and set design for the dance piece (…It is Contained In…) Neusser explores spatial investigations where she brings together the idea of movement, stage lights, water, glass and crystals to create poetic sceneries. She is interested in seeing how these materials refracts light along with the moving body and how it creates reflections in the space and thus creates new rooms. The work is a continuation of D1984 and Sculptural Spaces.

(…It is Contained In…) has its premier at Dansstationen, Malmö, Sweden, January 22nd, 2022.
Choreography and dance by Joanna Holewa Chrona och Yared Tilahun Cederlund.
The piece will tour in the spring of 2022 and will be presented at MDT, Stockholm and Atalante, Gothenburg, Sweden.

Carima Neusser presents her performance, Role Mother at Rawabet Theatre in Cairo as a part of the project Local Role Models.

LOCAL ROLE MODELS:
In times when freedom is continuously shrinking, it is easy for the population to fall into apathy and cynicism. Over time, the people gradually believe that the oppressors are right and it becomes increasingly difficult to imagine a future for oneself. This negative outlook on oneself, one’s life and reality makes it easier for oppressive powers to quench movements that wants to inspire democracy, freedom of speech and human rights. It makes it harder for women to find leverage, to stand up against men who want to control them. What is needed is hope (P. Levi, 1984). “Local Role Models” inspire women in three MENA countries to seek new motivation based on positive examples from their own culture and communities – to turn around negative thinking patterns without losing criticality.

In “Local Role Models” performances and workshops will become catalysts to spread positive ideas, stories and unique life journeys from the region. The collective work methods ensure that local narratives survive and thrive. The artists’ creative interpretations of the narratives further strengthen their individual potential and spreads them in the local communities where they originate.

The project is supported by Creative Force and Helge Ax:son Johnsons stiftelse.

THE DAY PORTER AT KL 9, STOCKHOLM 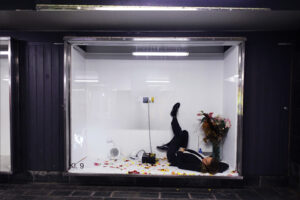 As part of the ongoing presentation of the Association for the Palliative Turn at Kl. 9, the Swedish artist and choreographer Carima Neusser will present her durational performance The Day Porter.

For 6 hours, Neusser will act as the day porter of the Kl.9 exhibition space. Throughout the performance she will be watching and screening Italian director Liliana Cavani‘s legendary film The Night Porter while chained to the wall. She will investigate the interaction between her own movements, the film and the people passing by her window. 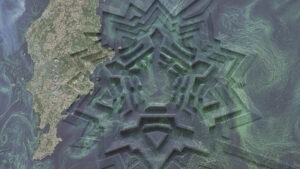 During the first Nordic Art Lab, an interdisciplinary group of artists will work to create the piece “Sensing Landmarks” over a two-week period. The three artists are Carima Neusser (Sweden), John Andrew Wilhite-Hannisdal (Norway), and Carola Uehlken (Germany).

The piece “Sensing Landmarks” brings together dance, visual art, architecture, music, and poetry with the aim of creating a guided tour that is specific to Suomenlinna’s nature, architecture, and history. During their residency, the artists will develop texts and scripts, choreography, music, videos, and scenography to guide the audience through an interdisciplinary experience with an emphasis on the senses. The work will be an opportunity to find new perspectives on Suomenlinna’s unique architecture and history in a creative and innovative way. The group will also invite people to participate in the creative process who have specific knowledge about or who feel a sense of love for the place. The work process is thoroughly transparent, with ample scope for improvisation.

At the end of the residency period, the public will be invited to participate in one of two guided tours organised by the artist group in Suomenlinna on Friday 8 October and Saturday 9 October 2021.

Sensing Landmarks forms a part of the project “Baroque Architecture and Submission” that is developed by Vision Forum in collaboration with various partners including Morgondagens konstpublik and is supported by the Nordic Culture Fund. 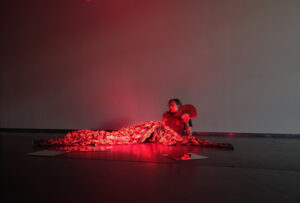 Swedish choreographer Carima Neusser has been in residence at Uferstudios during the month of August. She has been developing a series of tableaus based on a baroque poem “Schaubühne des Todes” from the 17th century poet Christian von Hoffmannswaldau. She has been researching in the studio with various dancers as well as visiting various monuments of that time in and around Berlin. For the presentation she will present a series of short scenes with two dancers along with live music and readings of the poem.